A Merry Little Christmas Cruise on U by Uniworld

You can never have too much holiday cheer;

get yourself in the spirit of the season with this 5-day cruise that gets you home before Christmas!

You’ll be in a state of holiday bliss as you cruise through Budapest, Bratislava and Vienna.

Experience true Christmas magic as these cities come alive during the holidays. 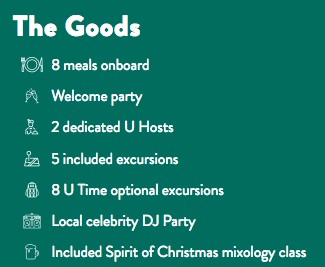 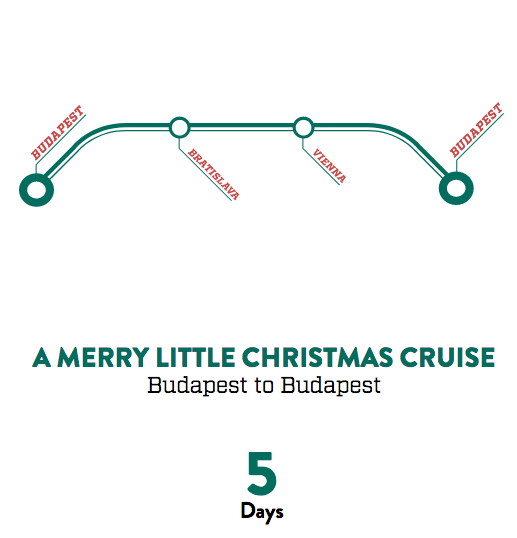 After you’ve refueled and gotten your jolly bearings, follow your host on a pub crawl through the city’s world-renowned ruin bars. Budapest has a reputation for being an epic party city, but we can’t be certain. If you could, please, follow your host through the city’s extensive scene of abandoned-buildings-turned-raves and report back to us. Once upon a time, there was an abandoned factory that had an appointment set with a wrecking ball. Its owners had another idea. They threw together old furniture and DIY decorations to create Szimpla Kert, the mother of all clubs. This laid the blueprint for every ruin bar after and now Budapest is crawling with them. Party your way through Budapest’s underground club scene, enjoying cheap drinks, techno beats and street art at every stop.

If you’re not yet in the holiday spirit, you will be. Follow your host into Budapest’s Christmas Fair at Vörösmarty Square. Gifts, trinkets and holiday treats—this place has it all.

Pay tribute to Budapest’s rich Jewish culture with a visit to the Holocaust Memorial Center and Dohány Street Synagogue. With seating for 3,000 people, Dohány is the largest synagogue in all of Europe and second largest in the world.

U Time - House of Terror Museum

Pay holiday homage to those who were held captive, tortured and killed in two of the bloodiest periods of Hungarian history. This fascinating museum offers an unforgettable look at fascism and communism in the 20th century.

Included Night Out - Ice Skating at the Castle

Put the night on ice and glide around the skating rink next to City Park and Vajdahunyad Castle for a Christmas activity that’s both romantic and nostalgic.

Join your fellow bookworms and coffee addicts on a tour of Budapest’s most beautiful libraries and coffeehouses. Flip through antique pages and revel in Hungary’s unique literary culture. Caffeinate to your heart’s content with the pick-me-ups that fuel the city’s coffee scene.

Take a break from the cold and warm yourself into a state of holiday bliss at Budapest’s historic Lukács Thermal Bath. The pools leverage the underground healing waters of Hungary’s oldest hot spring, dating all the way back to Roman and medieval Turkish times. Locals love Lukács for three things: relaxing in thermal baths, enjoying medical spa treatments and partying. That’s right—every Saturday night, it turns into a lively party venue with beer, cocktails, a DJ and a laser show. Be there for it all.

U Time - Rock Me, Amadeus

If there’s one “must-do” in Vienna, the mecca of classical music, it’s attending a Mozart and Strauss concert. This isn’t your average concert. Head to Klosterneuburg Abbey, a 900-year-old Augustinian monastery, for a classical music performance by a professional chamber orchestra. After, mix and mingle with the wildly talented musicians at an exclusive reception.

Walk the festive streets of Bratislava’s Old Town with your host and stop at the city’s annual Christmas market. Taste Slovak delicacies and pick up some Bohemian Christmas decorations and toys—all handcrafted for the holiday season.

U Time - After Hours at the Castle

What’s better than poking around a baroque palace? Poking around after hours, when the crowds of tourists have all gone back home. Your guided tour of Schönbrunn Palace—the former summer residence of the imperial family—includes the state rooms and private apartments of Empress Maria Theresa. A little background: Emperor Leopold I commissioned architect Bernhard Fischer von Erlach to build a palatial hunting lodge for the throne to be at the end of the 17th century. Half a century later, Maria Theresa Schönbrunn made it the focus of court life. Today, it plays host to highest-level politicians in all of Europe. And now—you.

U Time - Cooking to Opera

Holiday music and holiday food go together like wiener and schnitzel. Enjoy a private opera show while you learn how to make delicious Viennese eats from one of the city’s esteemed chefs. Because if you want to cook like a Viennese chef, you should listen to Viennese music, too.

Vienna comes alive during the holidays. Take a host-escorted, leisurely tour of the Freyung Christmas Market. It’s elegant and charming, located in the heart of the city. Then stop by the City Hall Market right in front of the illuminated neo-gothic building. For nativity scenes and artisan goods, check out the market at Karlsplatz, arguably the grandest baroque church in the world.

Disembark and onwards to your next fun destination!

Terms, conditions and restrictions apply; pricing, availability, and other details subject to change and/ or apply to US or Canadian residents. Please confirm details and booking information with your travel advisor.

You will visit the following 3 places:

Budapest is the capital of Hungary. As the largest city of Hungary, it serves as the country's principal political, cultural, commercial, industrial, and transportation centre. In 2010, Budapest had 1,721,556 inhabitants, down from its 1980 peak of 2.06 million. The Budapest Commuter Area is home to 3,271,110 people. The city covers an area of 525 square kilometres (202.7 sq mi) within the city limits. Budapest became a single city occupying both banks of the river Danube with a unification on 17 November 1873 of right (west)-bank Buda and Óbuda with left (east)-bank Pest. Budapest is one of Europe's most delightful and enjoyable cities. Due to its scenic setting and its architecture it is nicknamed "Paris of the East".

Bratislava is the capital of Slovakia and, with a population of about 431,000, also the country's largest city. Bratislava is in southwestern Slovakia on both banks of the Danube River. Bordering Austria and Hungary, it is the only national capital that borders two independent countries. Bratislava and Vienna are two of the closest European national capitals to each other, at less than 37 miles apart. Bratislava is the political, cultural, and economic centre of Slovakia. It is the seat of the Slovak president, the parliament, and the executive branch of the government. It is home to several universities, museums, theatres, galleries and other important cultural and educational institutions.

Vienna is the capital of the Republic of Austria and one of the nine states of Austria. Vienna is Austria's primary city, with a population of about 1.7 million (2.4 million within the metropolitan area, more than 25% of Austria's population), and is by far the largest city in Austria, as well as its cultural, economic, and political centre. It is the 10th-largest city by population in the European Union. Vienna is host to many major international organizations, such as the United Nations and OPEC. The city is also known for its Imperial palaces, including Schönbrunn, the Habsburgs’ summer residence. Apart from being regarded as the City of Music because of its musical legacy, Vienna is also said to be "The City of Dreams" because it was home to the world's first psycho-analyst – Sigmund Freud.

Follow in the footsteps of Van Gogh, Cézanne and Gauguin on this journey through southern France. Cruise the serene Rhône...

From The Convent Amsterdam

Highlights of China & the Yangtze